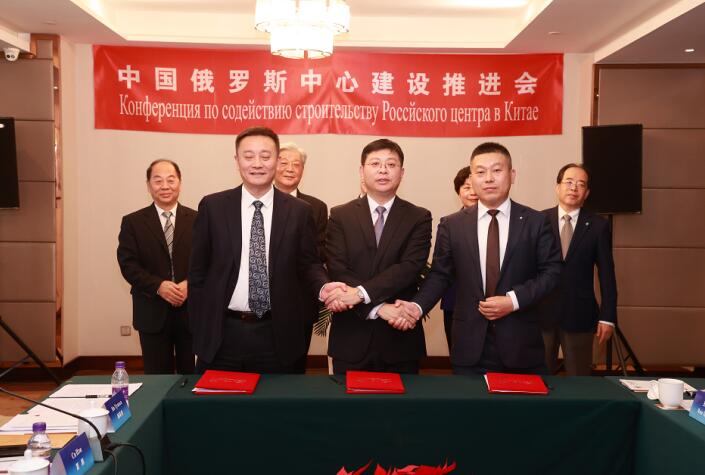 The China-Russia Center Project is located within the core area of the SCO Demonstration Area with a total investment of approximately 2 billion Yuan RMB and a construction area of approximately 200,000 square meters. It will fully integrate modern technology with the traditional Russian elements, build and form the informational headquarters on the regional investment and collaborations between Russia and China, the conglomeration of Russian enterprises in China, and the new platform and new bridge of collaborations in culture, tourism, science and technology between China and Russia.

Hua Nuo E Xiang (Beijing) Trade Co., Ltd. is one of the attending enterprises, and Sergey Sizov, its Director of Business Development, says that Sino-Russian trade has relatively strong complementarity in commodities, and there is also vast space for collaborations. The Center, which is in construction, provides opportunities and support for all the fields of collaborations between the two countries. In addition to the original foundations of collaboration, Hua Nuo E Xiang will utilize the platform of the Center to provide highly efficient commercial services for Russian exporters and Chinese importers, facilitate the connections and communications between the enterprises of Russia and China, increase the investment strength, enlarge the scale of trade, consequently contributing to mutual development.

As the construction of the SCO Demonstration Area began two years ago, there have been gradual improvements in “Hard Connection” conditions such as the international logistics channel and the international logistics hub, and there is also the continued increase in “Soft Connection” environment such as the increased convenience of international collaborations in investment and trade. Therefore, the Demonstration Area has realized diversified collaborations with Russia in the fields including investment, trade and culture. There have been air freighter flights and point-to-point trains to Moscow, and overseas warehouses in Russia have also been built. The Sino-Russian Energy Fund, which is worth 10 billion Yuan RMB, has attracted the establishment of various projects including Hua Nuo E Xiang and Jin Sheng E Business and Trade. The newly signed SCO Demonstration Area (Sino-Russian) Biomedical Industrial Park will create an industrial research center of the life sciences industry between the two countries, and also creates a trading platform of health products among the SCO member nations. Currently, the SCO Demonstration Area has held 9 economic and trade dialog events with St. Petersburg and Perm Krai, and has signed friendly collaboration memoranda 9 nine industrial parks including the Yelabuga Special Economic Zone, and has successfully held the First Sino-Russian Competition of Innovative Business and Creativity among Teenagers -- the Final Round of IT Hard Technology and the New Resource and New Materials Industries.

Qingsheng Meng, the deputy director of the Management Committee of the SCO Demonstration Area, says that the Russia Center to be built will integrate various resources including arts, culture, logistics, trade, science and technology, research and development, as well as technological transfer to a higher level. It will also facilitate the integration of relevant domestic industries, meanwhile attracting the establishment of Russian enterprises. By enhancing the interactions and coupling with Russian industries, the Demonstration Area will eventually become an important platform serving the regional development of Russia and China. The SCO Demonstration Area will seize the opportunity of building the China-Russia Center, deepen the impacts of the platform, magnify the “network of friends” in terms of economic and trade collaborations. It will also gradually enlarge the fields of collaboration with SCO member nations and the nations along the Belt and Road Initiative, deepen the contents of collaboration, and propel the Demonstration Area to create a new platform of Belt and Road Initiative international collaborations.